How Is Valid the Travel Document for Refugees? 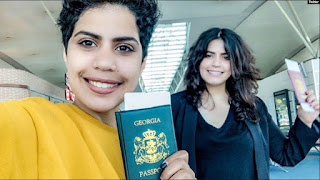 As we know, a blue passport  or travel document is different from a citizenship passport, and having it does not mean you can travel to any country without visa  ,so citizens can do. This means that Georgian neighbors countries such as Turkey and Armenia, which can be traveled without a visa, must also apply for a visa by blue passport holder.

An explanation is also needed for the 30 countries where it is said that one can travel without a visa. These are countries that do not require a visa from any passport holder in the world. Tuvalu, for example, is one of these countries. To reach this island you must first go to Australia and you will not be allowed to fly to Australia without an Australian transit visa. Therefore, in practice, travel to Tuvalu is possible with an Australian visa. All 30 countries have the same situation, which means that it is possible to fly to them from a specific country and you need a visa there. The result is that you must apply for a visa in advance to travel to any country with a Georgian travel document for refugees (blue passport).

The chances of obtaining a visa for other countries with a blue passport are very low. For a usual visiting  any country, there must be strong evidence that you will return to your country after the trip, and this is very difficult for a refugee. It is always assumed that a refugee who arrives at a better destination is more likely to not return, so countries are very strict in issuing visas to holders of  blue passports.

Another point about blue passports is that some countries do not recognize this passports, including Iraq and the UAE.

- To travel to any country with a blue passport, you must obtain a visa.

Issuing a visa for a blue passport holder is very difficult and often results a negative response.

-To  some countries absolutely can not travel with the blue passport.