Image Of Khamenei And Hitler 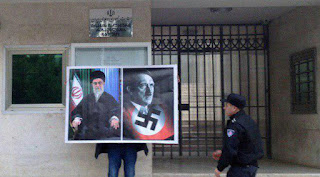 A banner depicting Khamenei and Hitler was displayed in front of the Islamic Republic's embassy in Tbilisi. The banner is reminiscent of two genocides at different times in history.
On the afternoon of December 26, 2019,  a banner featuring images of two criminals in history, Khamenei and Hitler, was displayed at the entrance of the Islamic Republic's embassy in Tbilisi. It was an unprecedented event that prompted the police to be curious before reacting. In the images obtained from this event, the face of the person who took the banner is hidden behind the banner, but considering the dimensions of the banner, it seems that the person is huge.
An interesting point in this picture is the appearance of the Nazi logo and the logo of the Islamic Republic next to both dictators. After a while, the police appeared on the scene in front of the embassy of the Islamic Republic of Iran and warned the banner holder. Embassy staff appear to have asked the police for help.

Is it possible to compare Hitler and Khamenei?
The two have at least one thing in common. Hitler was anti-Semitic and Khamenei was anti-Iranian. Both wanted to destroy what they thought the enemy through genocide. Khamenei has repeatedly ordered the killing of Iranians in order to isolate or send the younger generation abroad with the aim of making the Iranian nation part of the provincial ummah. Apart from genocide, there does not seem to be another obvious common denominator between the two. Hitler's Germany was at the forefront of industry and military power, but the only industry and production under Khamenei's rule was lies, deception, and psychological warfare. 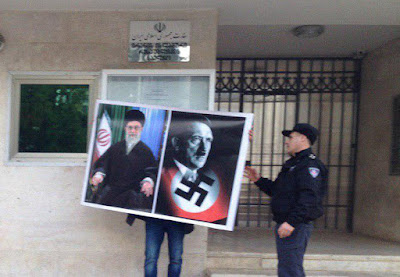