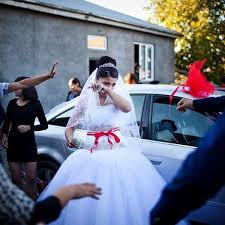 Bride kidnapping is a form of forced marriage იძულებითი ქორწინება that is still prevalent in some parts of Georgia. While the law provides  severe punishment for this act, the public conscience does not consider it a crime.
Georgia's Interior Ministry announced on February 14 that a 22-year-old man had been arrested for kidnapping an 18-year-old girl in Marneuli. The Interior Ministry said in a statement that the man would be sentenced to seven to ten years in prison under the law.
Although the news may seem scary at first glance, it was the intention of the man to kidnap her, and this phenomenon is very common in parts of Georgia. Last October, two young men were arrested on similar charges .

What is a kidnapping bride?
The phenomenon of kidnapping a bride is such that a boy kidnaps a girl with the help of his friends in order to marry her, and then asks his family to agree to marry them.
What happens to a girl after she is abducted depends on the culture and morals of the kidnappers. In some cases, rape or forced sex with a girl has been reported, but the fate of all the abductees is not so terrible.
A 28-year-old girl from Tbilisi said to me the story of her marriage : During high school, we lived in a village around Marneuli. One day as I was walking home from school, a couple of my boys forced me to get in the car. At first I was very scared, but when I saw one of the boys whose face was familiar to me, I calmed down a bit. I had seen him before, although I had no knowledge of him, but I felt that he was a good boy and did not want to harm me. The boys took me to a house and put me in a room with a dining table. The boys disappeared. There were a few ladies there who kindly invited me to sit at the table together. One of the ladies was so kind that I quickly became friends with her so much that I forgot she had been kidnapper. I was talking and eating with them. An hour later, the door to the room opened and my mother and aunt entered the room with the boy in the group of kidnappers. I was shocked to see them. Then I found out that the landlord had called them. One of the hostesses took my hand and forcibly put it in the boy's hand. Everyone applauded and said congratulations.

The abduction of the bride and the public conscience of the community
The abduction of the bride is common in the Azeri areas of the province of Kvmo Kartli . In a report published in the summer of 2017 by a local magazine , residents of one of the villages in the area describe the abduction of a bride as a tradition. In the same report, a civil activist in Marneuli says that the kidnapping of the bride is much less than in previous years. In October 2019, tensions erupted between a young teacher and residents of the village of Tazekendi over the abduction of a bride. Hamid Sediq, a geography teacher in the village, wrote on his Facebook page on October 9: One of my students was abducted. He was due to start his first day at university today, but he was abducted at a bus stop. Our society is made up of such lowly, bastard and dirty human beings. Now these crazy elders  come and say, "Don't worry, they will understand each other." The Facebook post was so negative that Hamid Sediq removed it from his page. In a video released from the street trial, a resident tells him that they respect his honor because he is a village teacher, but he has disrespected adults. Finally, Hamid Seddiq apologizes to the elders

Hamid Siddiq's story is a fact that shows that public opinion in these areas is in line with the phenomenon of abduction and does not consider it a crime or an important crime. In several cases, the Georgian police and government have dealt with the abduction of the bride, but there have been no reports of private complaints. 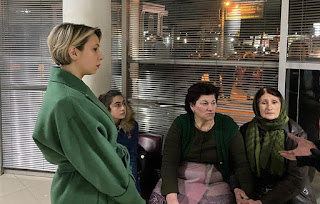 February, Nino Lomjaria, Ombudsman, travels to Marneuli and meets with the victim's family. The important point in the reports about Ombudsman's meeting with the girl's family is that they do not file any special complaint or lawsuit. It seems that Ms.Ombudsman insists that a major crime has taken place more than the "victim's" family (if this phenomenon is considered a crime from the family's point of view). While there is no private plaintiff in the case, Ms. Ombudsman emphasizes that the abduction of young people is part of the Marneuli school curriculum, and  the February incident was not in line with the girl's will and choice.
In the annual Ombudsman report for 2018 It is pointed out that some girls drop out of school due to fear of being abducted. This shows how serious and pervasive the issue of kidnapping girls is in some areas. However, the presence of Nino Lumjaria on the scene and her meeting with the bride's family or the victim is a positive signal that the Georgian government has noticed a gap that has been created between civil society and the government.